Saturday evening at bedtime, our 9 year old son Daniel told me: "Dad, I saw this program on TV. And it was two people talking, just like you and me. It was about sound and sound waves. I want to learn everything about sound. Will you teach me?"
Music to my ears :-)
So I pulled out two tools of choice: Wolfram|Alpha and Audacity. W|A is a computational search engine and, as my boys used to say, hecka useful (using "hecka" doesn't appear to be cool anymore BTW). Audacity is a swiss army knife audio recorder, editor, analyzer, and effects machine available for Mac, PC, and Linux.
Our "lesson" went back and forth between these two tools, with the real world intruding once in a while...
First off: What is sound? We talked about compression & expansion of air, how our ears work, and how sound does and doesn't travel through different mediums (like water & space).
Then I introduced the concept of Hertz. Here we used Audacity to generate an ever increasing tone from 1 to 300 Hz over 60 seconds. When do we start hearing sound? (On my Macbook Pro's speakers, around 100Hz). 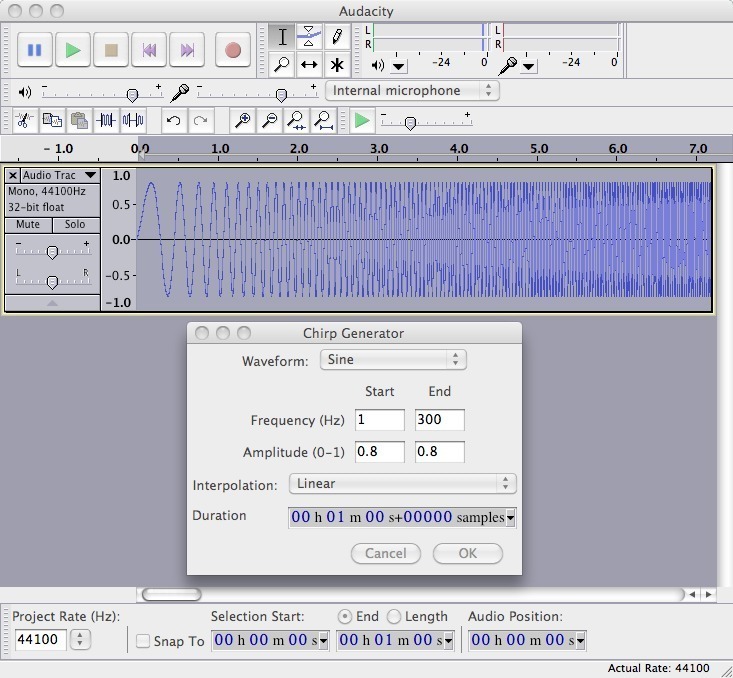 Once Hertz were understood (and we'd talked about the cool low Hz rumbles our subwoofer generates) it was time to break out Wolfram|Alpha, which has some useful sound generation features.
We initially played a simple 440Hz tone (which is the standard tuning for guitars and probably other instruments too). 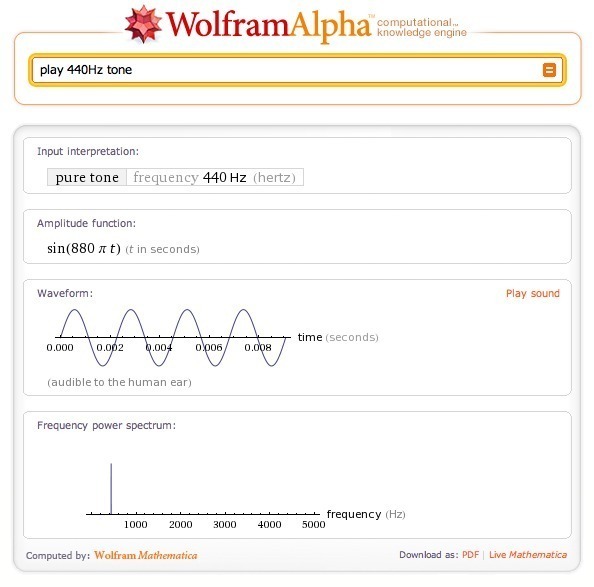 I'll spare you the lengthy and enjoyable experimentation that followed on W|A :-) We tried many things: different tones, combining tones, combining prime tones, even combining lots of tones and wondering whether a small change in one of the tones was still noticeable.
At this point I decided we needed a real time spectrum analyzer (Audacity can do the job, but it isn't real time). In the old (OK, old old :-) days I'd have used the one on my NeXTstation, very useful in tuning my guitar, but today I found AudioXplorer instead. Pity it's discontinued, but fortunately it's free, open sourced... and for OS X (I'm sure there are many equivalents on Windows).
Here's that 440Hz tone again... 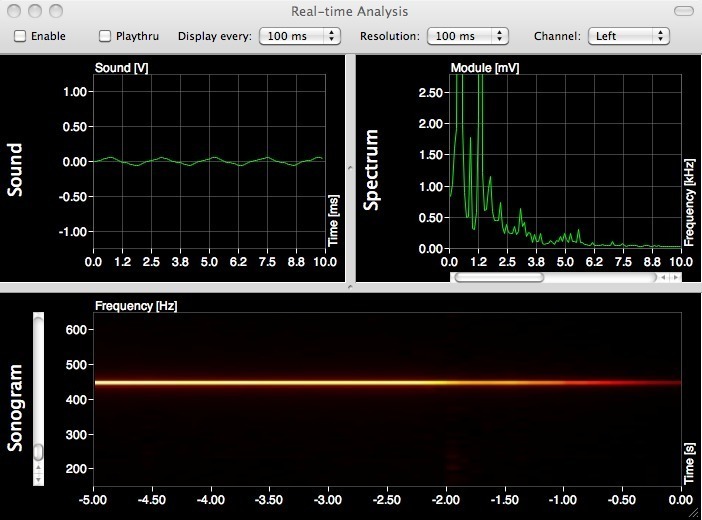 With AudioXplorer in hand, we headed to the piano and "looked" at lots of different frequencies. It was fun to watch Daniel's interest as he played ascending notes and saw the sonogram showing a staircase pattern. (More experimentation ensued).
Next we were back to Audacity: recording Daniel's voice and applying many fun effects to it. Echo, tempo change, reverb, and more.
Finally, back to Wolfram|Alpha one last time: experimenting with DTMF. I had Daniel press one of the keys on a phone, then we used W|A to reproduce it. Here's the tone for the "1" key. Unfortunately W|A sometimes introduces annoying clicks when generating the sounds, however you can use AudioXplorer instead, which gives correct output.
Once we'd understood how DTMF tones work and how to generate them, we used Audacity to generate a whole phone number and I showed Daniel the trick I'd promised him earlier: how to call someone without hitting any keys on the phone's keypad. We held the handset's microphone up to the laptop's speaker, press play, and... Magic! The call went through!
All in all we had great fun with these tools. Daniel and I learned a lot together. What does he want to do now?
GarageBand! :-)