I was inspired by Jack Dorsey's recent discussion on the importance of design. Many a blog post could be written on that topic. Jack's presentation also reminded me of a question that has nagged me for a while: how do the ballooning costs of the Bay Bridge replacement compare with the Golden Gate Bridge's construction costs? 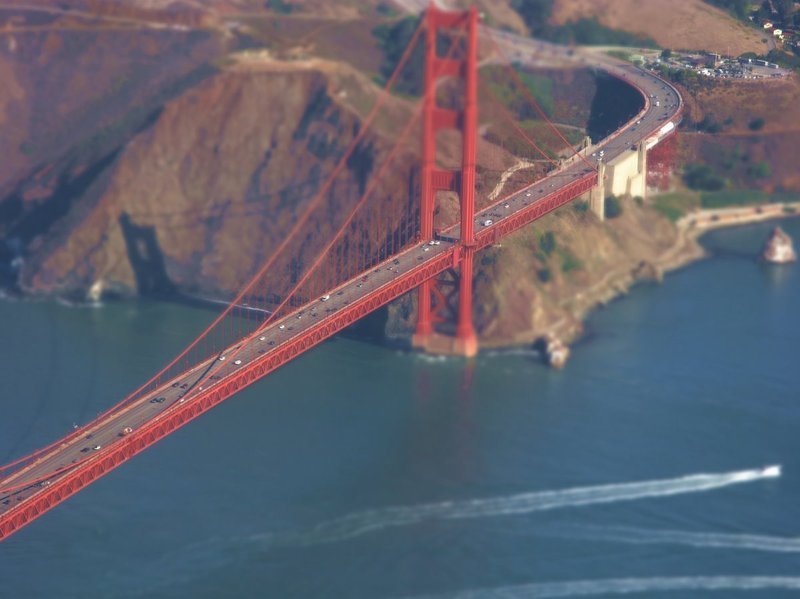 (Other pics in this series.)
Golden Gate Bridge
Bay Bridge Eastern Span Replacement
Woah! The Bay Bridge Eastern Span Replacement is FOUR TIMES more expensive than the Golden Gate Bridge!
Why?
Here are possible differences that, in my mind, can be discounted.
Labor costs: "The Golden Gate Bridge was built during the depression, when workers were cheap". True, but nowadays workers are augmented by much more capable machines.
Material costs: "Steel costs much more now".  At first glance, there's evidence to back this up. USGS data states that a ton of steel cost $10 in 1940 vs. $165 in 2009. Big difference? Not when you adjust for inflation... $10 in 1940 is $153 in 2009.
Complexity: "The replacement has to link itself to existing infrastructure, with a minimum of impact to the current users of the Bay Bridge". Fair enough... But can this really account for four times the cost? Hard to believe, esp. when the "trickiest Bay Bridge work" only cost $140 million.
Destruction: "We have to destroy the old eastern span of the Bay Bridge". Sorry, nice try but this was taken out of the current budget. Yes, we'll need to pay even more than $6.2 billion if we want to get rid of the old bridge.
OK, so maybe bridges are just more expensive these days?
Let's take a look at the top three longest suspension bridges in the world:
All three have significantly longer spans than the Golden Gate Bridge, let alone the Bay Bridge.
What's left?
I'm no expert on bridges. I may be missing something... It's just hard to find a reason why the Bay Bridge retrofit is so expensive. Other than mismanagement. On a massive scale.
Addendum (2011.3.26)
After writing this post I found an article, "The Most Expensive Bridge in the World", published in 2004 in Modern Steel Construction. Which bridge is it about? You guessed it! The Bay Bridge. The author, a structural engineer, called on CalTrans to make design changes to reduce costs. Ironically he already considered it the most expensive bridge in history when in 2004 it was only projected to cost us $4 billion...
Addendum 2 (2011.3.27)
I received a request for details regarding the project's evolution: How much was the work originally slated to cost? Why / When did it rise?
This article has a good summary. I'm quoting the main events it lists:
Addendum 3 (2011.3.28)
A friend of mine, a Civil Engineer and expert on bridges, sent me his summary of bridge costs across the world. It further highlights the fact that we Californians are paying way more than we should for this replacement... 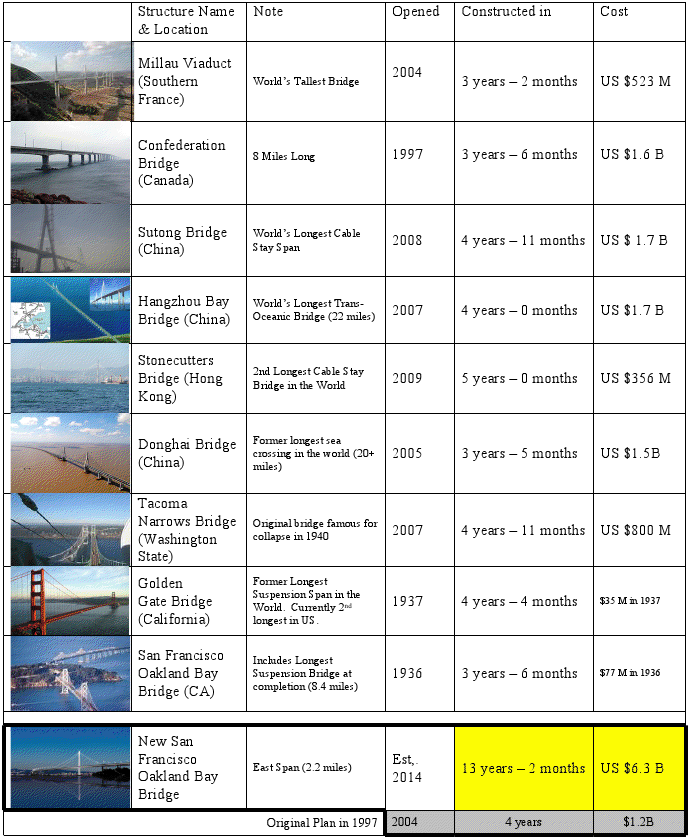