I was listening to NPR on the iPad this morning (nice app, but so unstable). The subject was rising food prices (30+% increase over the last few years) impacting poorer countries, like those in northern Africa, and that this was one of the main causes of the riots in Tunisia and Egypt: when people go hungry for too long, revolution happens.

Still, if food prices are rising why haven't we seen price increases here in the US? After a bit of digging, I found this explanation. It turns out that in the US (and I expect developed countries in general) the actual cost of the food we eat is a fraction of what we actually pay for (the bolding is mine):

Production and marketing costs determine the minimum price of food in the retail marketplace. Production costs are typically called the "farm value" of food, and they comprise about 20 percent of the final food cost. This percentage varies by type of food, depending on how highly processed or perishable the food is. The farm value for meats and dairy products is around 28 percent, for poultry around 41 percent, for cereals around 5 percent, for fresh fruits 16 percent, and for fresh vegetables 19 percent. As consumers demand more highly processed foods, fresh foods from distant places, and foods ready to eat, the farm value falls as a percentage of the retail price.

So when you buy a $4 box of cereals at the grocery store, the raw ingredients only cost about $0.20. In a country like a Egypt where 20% of the population subsists on $2/day or less (some articles I've seen put this at 40%), people spend a substantial portion of their income on food. A 30% percent increase is going to hurt. A lot.
Here's the price of wheat over the past two years.

In the US most citizens probably wouldn't notice a 30% increase for two reasons. One is that we're (on average) over 20 times more affluent than our Egyptian counterparts, so we spend a much smaller portion of our income on food, and we can tolerate an increase. 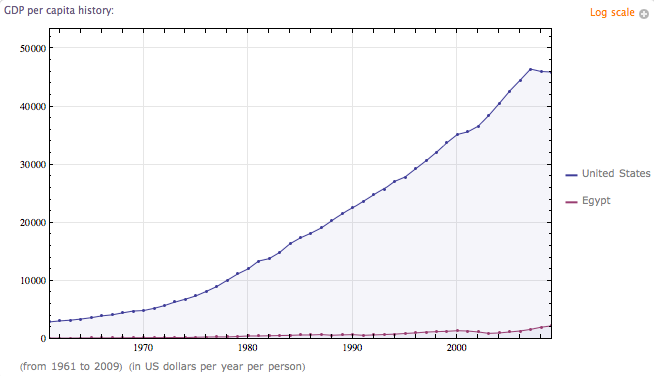 (Hard not to notice how 30 years of dictatorship have flatlined Egypt's GDP per capita...)
The second reason we don't notice is that a 30% hike would push the farm value of that $4 box of cereals to $0.26, which is usually absorbed by the rest of the value chain without being passed on to consumers. So what are we paying for then?

Raw commodities (farm value), labor, and packaging comprise 67 percent of the cost of food. The rest of the costs are in transportation, advertising, rent, profits, energy, business taxes, depreciation, interest payments, miscellaneous costs, and repairs. These last types of costs have increased at about the rate of inflation and have not changed their share of the food dollar much over time.

No wonder more and more people (ourselves included) are buying local.
Note: Yes, I know there are many other reasons developed countries don't have food riot (e.g. democracy & the ability vote bad leaders out of office). What struck me most is how most of the money we, in the developed world, pay for food doesn't even go towards the food itself.