One of my favorite blogs is FlowingData. It's a great place to find all sorts of thought provoking (and sometimes weird) ways to visualize the world around us.
Yesterday, there was a reference to a very interesting article in the New York Times called "Mapping the Nation's Wellbeing". It measured Gallup's analysis of people in the United States well being across a number of variables: Happiness, Diabetes, Smoking, Exercise, Inadequate Food, etc. It's well worth viewing. Here's the summary graph (darker = greater wellbeing). 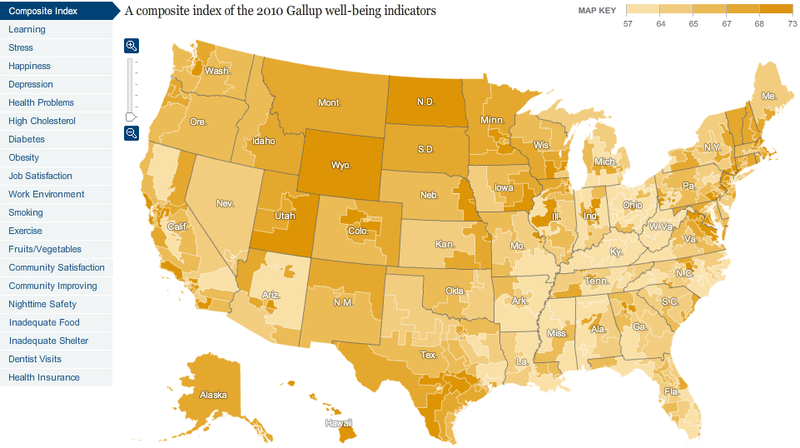 As you compare the different categories you'll be struck by how badly the South East of the US scores, which made me yearn for one piece of information that isn't included in this diagram: the per capita income of each state. Surely wealthy states are happier, right?
Wikipedia has data for 2009 but its graph dates back to 2006. That's pre-recession, things have changed since then. So I fired up Mathematica to create a 2009 version. (I won't include the code here but the notebook in this post made graphing the US very easy). 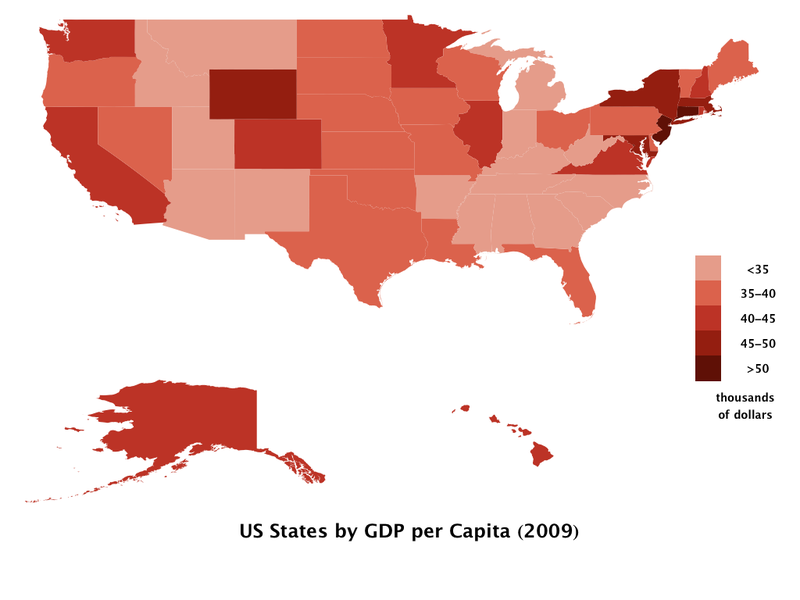 So does Wealth equal Happiness? It certainly seems to help but not universally: the South East is clearly poor and unhappy but Montana is about as poor as yet much happier. One surprise for me: Wyoming. I never realized it was so wealthy. Minerals and low taxes?
Whatever the correlation between happiness and wealth, smarter people than I have thought about this issue:

“Money doesn’t make you happy. I have $50 million but I was just as happy when I had $48 million.”—Arnold Schwarzenegger
“Money frees you from doing things you dislike. Since I dislike doing nearly everything, money is handy.”—Groucho Marx