Netcraft's surveys of internet web servers has been a staple of the net since 1995. Eons in internet time! In those early days I fondly remember regularly checking Netcraft for updates and discussing the merits of the various web servers with friends and colleagues.

I hadn't thought of Netcraft in years and when I suddenly remembered them the other day, I had to go check. How were the different web servers doing? 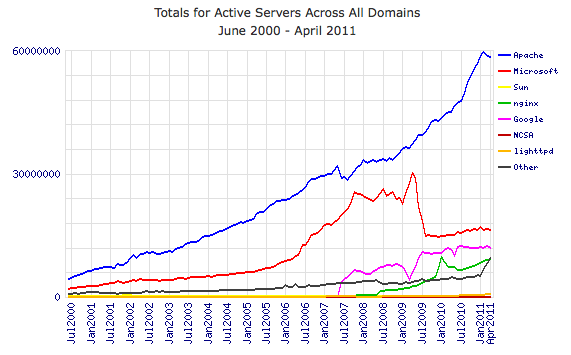 I wasn't surprised by the rapid growth of Apache but I was surprised by the dramatic fall and subsequent slow rise of Microsoft's web server.  According to Netcraft the drop in Jan-Jun 2009 was caused by a reduction in activity in Microsoft's Live Sites.
Looking at web server popularity in relative terms, the slow rise becomes a rapid decline in market share: from close to 40% to around 15% penetration in four years. 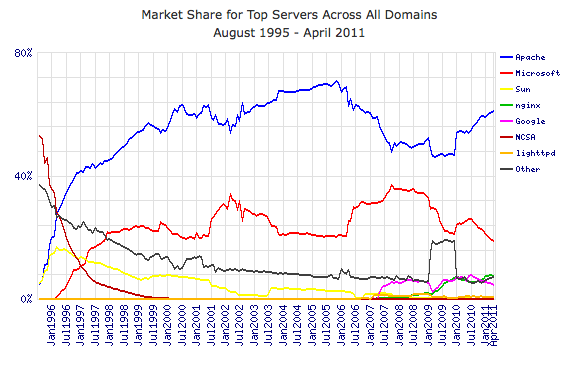 It's useful to remember that there are lies, damn lies, and statistics. There could be many explanations for Microsoft IIS' relative decline.
One is that Netcraft is measuring incorrectly. Netcraft has been at this for a long time, so I'm going to assume they know how accurately count servers. Part of the decline is due to the Live Spaces moving to Wordpress. Clearly Microsoft doesn't view blogging as strategic. Fair enough.
Another point to keep in mind is that Netcraft's survey is internet-focused. If they could survey intranets, I'm sure the number of IIS servers would be significantly higher.
Still, I can't help thinking that this is yet another front Microsoft is losing ground on. And the web server is just the tip of the iceberg. Internet sites aren't choosing Apache as much as they are choosing web application stacks that use it.
Continued loss of web application stack market share will have significant repercussions in terms revenues. Hard costs such as server and software licenses. Soft costs such as losing popularity among developers. This isn't enough of a reason to ditch Microsoft for established sites. It is a reason to think twice before going with the Microsoft stack for new projects.
It's a shame. Microsoft's web application stack has decent technology, and Microsoft has smart engineers. They are quite capable of innovating in this space. They're just not doing so.