Australia isn't only home to many beautiful birds, it's also home to many species of bat. An everyday occurrence for many Australians, seeing flying foxes in the skies at dusk, was a magical moment for our family. This just doesn't happen in California!
A few days later we were visiting friends who live next door to a bat colony. Walking under the canopy we spotted something all too common these days: a fruit bat struggling on the ground. She wasn't alone either: a pup was desperately clinging to its mother.
Mum was slowly dying from a paralysis tick bite: most Australian animals have built up immunity to its venom but not bats. Since the introduction of the tobacco plant twenty (?) odd years ago, the bats now come into contact with these ticks. Why? Because the flying foxes like the fruit of the tobacco plants, which are much shorter than the other fruit trees they frequent. Since they're shorter, ticks jump from forest animals like wallabies onto the plants, along comes a fruit bat, and...
The bat we found had a single tick on it. Our friend removed it but the damage was done: she didn't think the mother would make it, nor would the pup if we didn't do something about it.
Wrapped in a blanket we rushed both of them to the local bat hospital: a group of very dedicated individuals working hard to rehabilitate sick, injured, and orphaned bats.
The good news? They gave mum an antidote and she recovered! Both mother and daughter are now doing well and when we returned a few days later, the pup had been moved to an external cage.
Sadly, unless bats build up immunity to the ticks, I don't see their future very bright. A shame as they're beautiful creatures. 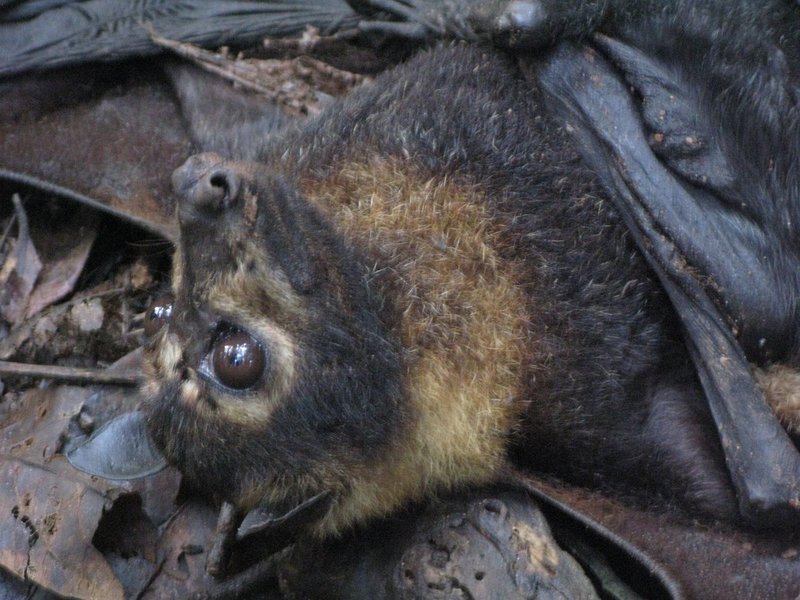 Here's a short video of the bats we saved...