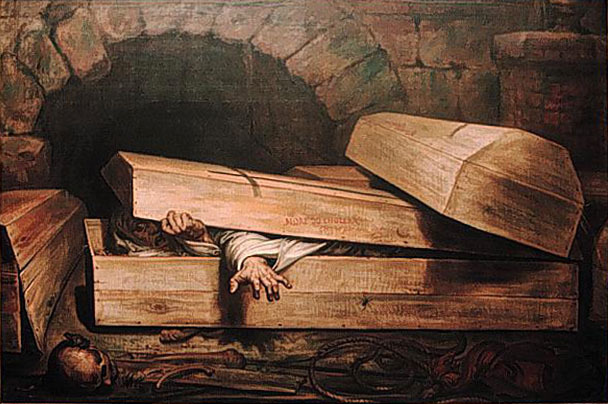 Michael Crichton's "The Great Train Robbery" is one of my favorite novels. It's part history, part thriller, and lots of fun. You follow master criminal Edward Pierce as he plans and carries out the crime of the century: stealing gold bullion from Her Majesty's government in Victorian England. Interestingly the mastermind was caught: Crichton used Pierce's courtroom testimony to write the book.

One of my favorite passages focuses on reversed expectations. Pierce needs to get his accomplice on board the railway car that's carrying the gold. The problem is that guards are checking all luggage to ensure no one can be smuggled aboard.

Pierce solves this very cleverly by hiding his accomplice in a coffin with a dead, very dead, cat hidden inside. Pierce's girlfriend plays the role of a grieving sister taking her poor brother's body home for burial. In those days Victorians were very afraid of being buried alive. Many coffins, including the one Pierce used, had a small bell mounted on them that could be triggered from the inside: just in case the dead "woke up". That's where the expression "saved by the bell" comes from.

Pierce's girlfriend is weeping on the railway quay when suddenly that little bell begins to ring. She cries out in alarm, then in joy. Elated, she begs the guards to hurry, to undo the latches. In her state of faked excited she tries to help but her fumbling slows the men down. "Oh please hurry!" she shouts.

The coffin is almost open. "My brother is alive after five days! I knew it wasn't cholera!" That gives the guards pause: cholera was a very real danger in those days. When the coffin's finally opened, the stench is unbearable, the "corpse" (Pierce's heavily made-up accomplice) is a nauseating shade of green, and the "sister" swoons in the arms of a guard.

The coffin is hastily closed, the sister revived, and the coffin placed in a railway car... The one with the gold.

Here's what Pierce had to say about this:

In later courtroom testimony, Pierce explained the psychology behind the plan. "Any guard watches for certain happenings, which he suspects at any moment, and lies in wait for. I knew the railway guard suspected some fakement to smuggle a living body onto the van. Now, a vigilant guard will know a coffin can easily hold a body; he will suspect it less, because it seems such a poor trick for smuggling. It is too obvious. "Yet, he will likely wonder if the body is truly dead, and if he is vigilant he will call to have the box opened, and spend some moments making a thorough examination of the body to insure that it is dead. He may feel the pulse, or the warmth of the flesh, or he may stick a pin here or there. Now, no living soul scan pass such an examination without detection. "But how different it is if all believe that the body is not dead, but alive, and wrongly incarcerated. Now all emotions are reversed: instead of suspicion, there is hope the body is vital. Instead of a solemn and respectful opening of the casket, there is a frantic rush to break it free, and in this the relatives join in willingly, sure proof there is nothing to hide. "And then, when the lid is raised and the decomposed remains come to light, how different is the response of the spectators. Their desperate hopes are dashed in an instant; the cruel and ghastly truth is immediately apparent at a moment's glance, and warrants no prolonged investigation. The relatives are bitterly disappointed and wildly distraught. The lid is quickly closed--- and all because of reversed expectations. This is simple human nature, as evidenced in every ordinary man."

It's social engineering at its best.